For much of my adult life, I’ve been a consciously sexual being. I recognize in myself an enjoyment of the human body – mine and others – and have had a number of satisfying (and a few unsatisfying) sexual relationships. I love that part of our being human that makes us both sexual and aware of our sexuality. I love that we get, as they say, warm for another’s form. Even when I am single, like I am now, I enjoy flirting, feeling sexual and sensual, dwelling in desire and passion. I love performing with a bit of sexual sparkle (as I did in the UTS drag show last year). And I absolutely love that we teach healthy sexuality to all ages in the Our Whole Lives curriculum. 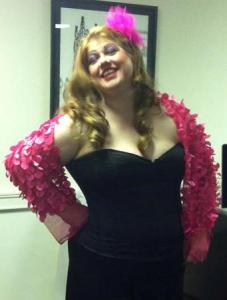 In other words, sex is pretty awesome and a celebrated part of who I am.

Thus I’m finding it awfully unnerving to be in a space where there is no passion, no attraction, no feeling of sensuality or sexuality, no desire to be sensual or sexual. This just isn’t me. I’m not asexual. I’m not cold or unmoved. So it’s been odd.

I’m keenly aware that a number of things may be contributing to this: I’ve been stressed in my work and home life (both of which have just recently released their anxious grip). I am in that wonderful stage of a woman’s life known as peri-menopause (Lord, help me to hold out / until my change comes!). There is a distinct lack of interested parties within 3,200 miles of me – including myself. Before now, I could overcome lack of partner or lack of peace and still get in touch with my sexual core, but right now, I’m feeling like a dud.

This is typically the place where I would spiral into negative self-esteem – no one will ever love me, I’m utterly unattractive, there’s something wrong with me, I’m officially a broken mess. If I can’t be wholly whole, then I am completely broken.

Except that for a long time, I wondered if I was too sexual for this path, too expressive with my passion and enjoyment to be the perfect pastor. Even through three OWL training weekends, I wondered if my personal enjoyment was inappropriate despite a clear call for some to be healthy sexuality religious professionals.

And then I met a colleague, Dawn, at General Assembly in Providence, whose energy connected to mine (and we became fast friends), whose queerness of both gender and preference is intriguing and delightful, whose fierce work in sexuality is inextricably connected to their call, which makes them come alive and evoke aliveness in others. Dawn showed me that all the facets of who I am – artist, nerd, extrovert, brain, geek, sexual being – make me the minister I am called to be.

But I am still a sexual being. And an artist, and a nerd, and an extrovert, and a brain, and a geek. All at once, and in different measure at different times.

So what if I’m not feeling sexual right now. It’s okay. I’m still whole and healthy and worthy.

For the record, I am estatic that New York State is now allowing any committed couple to legally wed – gay or straight. It’s been a hard fight and a sweet victory… and yes, there are still many battles for LGBT rights left to fight (repeal of DOMA, federal marriage equality, etc.) but..it is a sweet sweet victory.

I’ve spent a lot of time in the last couple of days viewing pictures of newly married couples, some who have waited decades for the day to come. I’ve read their stories, heard their cheers. I have cheered with them. And I’ve cried.

And not all the tears were tears of joy.

This seems to be giving me an opportunity to talk a little about my own history… to explore a rich piece of who I am, and begin to find language to explain where I have been and where I am now without people freaking out. I am, as it happens, one of those people – like Holly Near and Anne Heche – who have loved both men and women, and after many years being actively and happily labeled a lesbian, now consider myself bisexual. No, I didn’t “get cured.” No, it wasn’t “a phase.” As a teen, I was attracted to men and women… and in my early 20s, after some meandering, found that I was most comfortable identifying myself as a lesbian. I had a couple of great (and a handful of terrible) relationships. I embraced my phsyical and emotional attraction to women. I fought for equality. I marched in parades, protested with the Lesbian Avengers, even appeared on local news, and was on the front page of several state-wide newspapers, me kissing my girlfriend in front of a parade banner.

In other words, I was out, I was proud, and I was active.

In the mid-90s, I had met the person I thought I would spend the rest of my life with. Tricia was vibrant and brilliant – she lived life large. She was passionate, funny, earnest. And she loved me fiercely. In 1997, we decided to make steps toward as legally permanent a relationship as we could have in North Carolina. We were beneficiaries on as many policies as would allow us. We had medical power of attorney for each other. We were on our way to buying a house together and working with a gay attorney to ensure we were as protected as we could be, even as we began to talk about plans for a ceremony.

Parallel to this, I was completing my bachelor’s degree at Meredith College…. and Tricia was slipping back into a narcotics addiction I thought she had beaten in the late 80s. Using debilitating migraines as her excuse, and not telling her several doctors about the previous addiction – or in fact, even about each other – she amassed a stockpile of narcotics and used them to “help” her headaches.

I should have known, the day she got a new doctor to give her methodone as as way to manage the pain. But I didn’t. I didn’t know about addiction, about prescription drug abuse. I hadn’t had any experience with it. So I trusted her doctors… trusted her… and on April 7, 1998, Tricia had a heart attack, likely induced by the narcotics, and died that afternoon.

Now I tell you this because for a long time after she died, I was convinced I would never love again. And then, as I crawled out of the cave of blinding grief, it was men who offered the kind of comfort I seemed most to need. Women seemed harsh, or overbearing. Men were more measured, giving me space, and time, and a rather appealing kind of support.

Several years later, in considering relationships again, I found I was turning toward men – something I hadn’t done since my early 20s. It wasn’t that I suddenly found women revolting – it was just that, well, something had changed. I went from looking for women, to “if it really is about loving the person, not the gender, I have to be open to it being male or female”, to simply knowing I wanted a relationship with a man.

Since Tricia’s death, I have had a small handful of relationships with men – all were what I needed at the time, although I think I spent a few years learning the things always-straight women learned about men  in their early 20s. I also spent a few years learning how different relationships with women and with men can be. This is NOT a judgment on either one – both are great, both are terrible, both are what they are.  I am blessed right now to be in a great relationship with a man who is kind, open, funny, brilliant, and charming. I am unsure where the relationship is heading – but it is steady and positive, and I feel loved and supported. I still have moments when I miss Tricia, but they are fleeting, and I – like many young widows and widowers – have moved on to a new phase.

But it’s not reality.